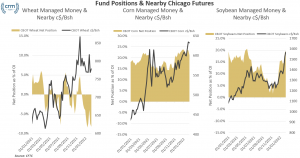 With the Brazilian harvest now well underway, actual harvest yields will soon be known and the impact of drought conditions quantified.