Starting the week and commodity markets in general opened lower, with crude oil falling back below $110/Bbl, corn, wheat and soybean markets also begun the week under pressure.

Soymeal markets have however gained support today amid moves by Argentina to halt export registrations for soy oil and meal. Physical shipments are yet to take place, waiting for harvest availability, and the move is likely to facilitate a change to export taxes, rather than be a long term export ban.

Maintaining the theme of export bans, Russia may ban the exports of grains until the 30th of June, causing what markets to gain during the day. Details are yet to be made clear and if this would impact upon existing commitments. Russia has a history of interfering in export markets to control domestic price inflation, especially prominent with the Rubble having collapsed due to sanctions. 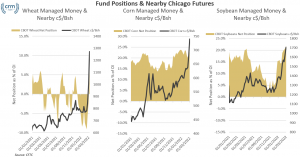