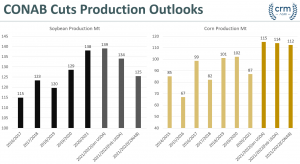 Brazilian organisation CONAB today came out with an update to production outlooks. Soybean production estimates have been cut substantially and well below yesterday’s USDA production estimates. Yield estimates at 3t/ha are estimated to be down 12.3% year on year due to a combination of drought conditions in southern regions while prolonged periods of high rainfall further north limited sunlight. At 125Mt, CONAB’s revised estimates are now 9Mt below the USDA.

In terms of corn production, and CONAB’s production outlook is broadly inline with the USDA. A divisive growing season for first corn where southerly regions and into Mato Grosso experienced high temperatures and water deficit, while the rest of the growing regions experienced near perfect conditions. Overall, first corn yields are expected to be down 5.2% year on year.